Here’s a link to a condo project in downtown Toronto: 161spadina.com

The building is actually the former St. Margaret’s Anglican Church, located on the east side of Spadina just south of Queen. I’ve walked and driven by it countless times and never knew. At the moment the building is used for retail and doesn’t look like it does in this brushed-up photo. You can see the shape of the church building in behind the facade, and the feature photos of the condos show the shape of the windows.

The first service at St. Margaret’s was held in March 1890. Only nineteen years later, in 1909, the parish closed. Why such a short history? I haven’t yet been to the diocesan archives to see what might be unearthed there, but my guess is that, first, there was a second Anglican Church just north of it on Spadina (St. Philip’s, on the west side, just south of Dundas) and, second, Spadina was being quickly commercialized in the early twentieth century and the natural residential parish disappeared.

Seems St. Margaret’s was a pretty high church sort of place. The rector, Robert James Moore, was a graduate of Trinity College, previously serving as curate at St. George’s, St. Catharines and St. George’s, Toronto. Here’s how John Ross Robertson described the liturgy: “The services at St. Margaret’s are on the model of an English cathedral, there being a surpliced choir of both men and boys.” Holy Communion was celebrated twice a Sunday and on festivals and Wednesdays.

After it closed, the congregation merged with St. George the Martyr and the property was sold. It was converted into a factory and the Art Deco facade added. 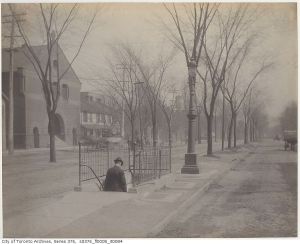 This picture, from the City of Toronto Archives, shows St. Margaret’s on the left. The stairs in the middle of Spadina led to underground washrooms. 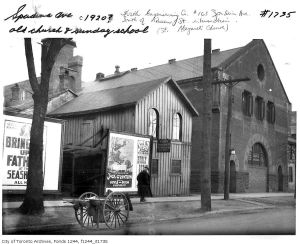 This photo, also from the City of Toronto Archives, shows the building c. 1920, after it had been converted into a factory. Notice how the great west door has been closed up. Unfortunately, because of the overlaid caption on the original, we can’t tell whether the cross has been removed.

This sketch, from John Ross Robertson’s classic Landmarks of Toronto, shows St. Margaret’s while it was still in use as a parish church.

Next I’ll post what I know about St. Philip’s, Spadina, which moved up to North York, and closed in the last year or so.