If the impetus behind the founding of St. Luke’s was the desire for a parish of high churchmanship, the impetus behind the founding of Grace Church, Elm Street was the opposite. The parish was founded in 1874 in opposition to the “ritualistic practices” Holy Trinity Church (located beside today’s Eaton Centre). The year before, the Church Association had been formed, with a mandate “to maintain the principles and doctrines of our Church as established at the Reformation and to preserve the simplicity of her  Protestant worship and the purity of her Scriptural teaching.” Several prominent members of the Church Association were instrumental in the founding of Grace Church.

Initially, Grace Church met in a small rented frame mission church building on Elizabeth Street. The cornerstone of the church was laid in 1875, and Grace Church opened on January 2nd, 1876. The building, composed of white brick with red trim, was located on the south side of Elm Street, just west of Bay Street and east of Elizabeth Street. In 1880, the parish purchased the lot to the west, and the building was enlarged the next year. Despite this addition, the chancel remained to be built (and, in fact, was never completed). This sketch shows the east side fo the building where the chancel was, some day, intended to be built. 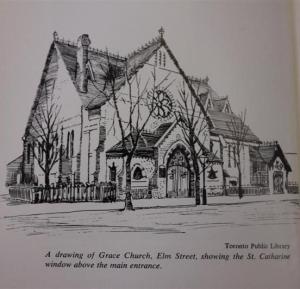 The parish history notes that the building was always rough and unfinished, but goes on to observe: That the success and prosperity of spiritual work do not depend upon architectural beauty or the special attractiveness of a room is evident in the case of Grace Church and Sunday School. The latter numbers 572 and is in a most flourishing condition, notwithstanding that there are in the city many more beautiful rooms for children; but they do not have the same number of children.

Despite the low church principles upon which Grace Church was founded, its first rector, W. Henry Jones, was a high churchman, and appointed against the parish’s wishes.  He and the parish clashed, and the rector resigned. It seems that, throughout its history on Elm Street, conflict between high and low church sympathies persisted, which led to a somewhat unstable existence.

Coupled with this dynamic, the neighbourhood was changing. Grace was located in the centre of St. John’s Ward, which was a densely-populated neighbourhood with lots of low income housing. Late in the nineteenth century, the Ward became a desination for immigrants arriving in Toronto. Many came from continental Europe and were not Anglicans. (Interestingly, in 1899, Grace Chuch ran an “Italian mission”.)  As well, new residential areas to the north were hiving off Grace Church parishioners, and the southern part of the Ward was becoming increasingly commercial. By 1889, just fifteen years after its founding, consideration was being given to selling the property and moving. The depression in the 1890s temporarily put a halt to this conversation.

In 1907, consideration began again of the possibility of moving the parish. The final impetus for a move came in 1910, when the rector, A. J. Fidler, moved to St. Clement’s, Eglinton. Bishop Sweeny attended a special parish meeting. According to the parish history, “[t]he Bishop reviewed the past history of the church and explained the necessity of a change to some other locality. One-half of the area of the parish was then occupied by hospitals, the armouries, factories, and office buildings, as well as a number of churches of other denominations. Very few members of the congregation lived within the parish boundaries, and the others attended Grace Church only through loyalty and long association.” (This points to a pattern which continued to affect parishes in the city through the first half of the twentieth century.)

As St. Luke’s, Bay Street was to discover some fifteen years later, the question of where the parish would move to was controversial, as already established parishes were generally opposed to having a new parish come into their bounds. New land was purchased for Grace Church, on Lonsdale Road and, in 1911, Grace Church, Elm Street became Grace Church-on-the-Hill, a parish that last year marked its 100th anniversary in its new location. A condition of the sale of land, though, was that part of the proceeds were to be shared with Christ Church, Deer Park, the Church of the Messiah, and St. Michael and All Angels.

The last service on Elm Street was held on December 3rd, 1911. The organ, altar, font and pulpit were moved to the new location, and the font continues in use to this day. The first building used by Grace Church-on-the-Hill was the former Christ Church building. The photograph below shows it being moved to its new location. (There is a little irony here, for Christ Church had vehemently objected to the establishment of Grace Church in its new location.)

The history of the diocese of Toronto, By Grace Co-Workers, records that the Baldwin family had offered to donate the land, but on the condition that candles be allowed on the altar of the new church. The leaders of the parish, true to their roots, refused this offer and, instead, purchased the land. (Elwood Jones, “Reaching Out for Two Hundred Years”, in Alan L. Hayes, ed., By Grace Co-Workers (Toronto: Anglican Book Centre, 1989), p. 155.)

The former Grace Church continued in non-ecclesiastical use. The photograph below (from the Toronto Public Library digital collection) shows it in 1954, in use by Robertson-Nash Storage, modified in several ways (including the filling in of the window above the main entrance.

Today, this land is the site of a parking garage for Sick Children’s Hospital, located kitty-corner from where Grace Church, Elm Street once stood.