Across the street from Toronto’s Four Seasons Centre for the Performing Arts, on the south-east corner of University and Richmond, is the Hilton Hotel. It was on this site that the Church of the Ascension stood from 1877 until 1933. 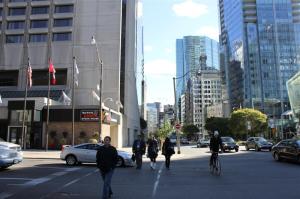 Founded as an evangelical response to high church practices at St. George the Martyr (near today’s AGO), Ascension’s history is one of independence and conflict with the bishop and diocesan authorities.

In 1876, a lot was purchased on the south side of Richmond Street for the purposes of establishing an unabashedly evangelical parish. At the time, it was the site of tenement housing. The trust on which the parish was established states clearly that the Church of the Ascension was to be a parish “in which the teaching, preaching, services and government shall be always strictly Protestant and Evangelical in conformity with the doctrines of the Church of England as expressed in the Thirty Nine Articles as now established, interpreted according to the natural meaning thereof, and from which the doctrine of the Real Presence in the Lord’s Supper and everything else which is repugnant to its Protestant and Evangelical character shall be vigorously excluded.”

The building opened for worship on Advent Sunday in 1877. Designed by the architectural firm Darling and Curry, it was of gothic style in white brick with stone dressing. In 1884, additional land was purchased and extensive interior alterations were made. 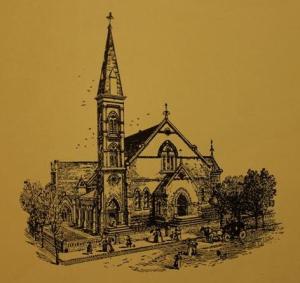 Although the exterior of the Church of the Ascension was said to be unexceptional, the same was not said of its interior, which featured decorative work by architect Frank Darling. Here is John Ross Robertson’s description: The walls, arches and ceiling are all painted according to a design that may best be expressed by the word unique. It is a style of decorative art, partaking of the Moresque, freer than the antique, with suggestion of more modern Orientalism; perhaps it falls in with the Renaissance proper; at all events it is exceptional, and very impressive and rich. However fanciful any details may be they are not so violent as to mar the beauty and symmetry of the general style. Perhaps it impinges too much upon the sombre, and yet the introduction of more brilliant colouring would render the general idea grotesque. It is an artistic piece of work, and as such merits examination and approval.” 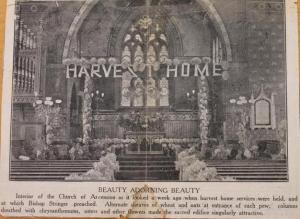 It would seem that Ascension was a “destination” church, drawing prominent Toronto low church families who lived outside the parish boundaries. (Professor Goldwin Smith, whose Grange manor was to become the nucleus of the Art Gallery of Ontario, was a parishioner, despite living beside St. George’s.) In fact, the immediate vicinity of the Church of the Ascension was poor and industrial. John Ross Robertson’s contemporary account posits that Ascension was located too near York Street “with its unsavory reputation” and too near the “notorious” Adelaide Street. In his words: “a more undesirable locality for a church of its kind is hardly conceivable.” Nevertheless, the first few decades of Ascension’s life were very much its heyday and it was one of the largest Anglican parishes in Toronto. In 1886, for instance, there were 700 children in the Sunday School, the average Bible class attendance was 200, and there were 125 in the infant class.

By the early twentieth century, the tide began to turn for the Church of the Ascension and, by 1919, serious consideration was being given to selling the property and moving the parish to a new site. (In fact, a motion to do this had been considered as early as 1905.) The parish began to accumulate debt, the diocese and bishop became involved, and vestry several times passed motions to sell the property and move, only to later rescind the motion.

The state of flux intensified in 1924 when the rector, the Reverend J.E. Gibson, informed the diocese that he had purchased the YWCA building at 180 Simcoe Street, and that he would hand that property over to the diocese for one-third of its value if the church would make provision for “immigration work”. In 1926, the diocese sought parish approval to sell the church property and to direct the proceeds to expanding the buildings at 180 Simcoe Street (sometimes referred to O’Pip House), with the congregation (by now quite small) relocating worship on this new site. (Ironically, permission had to be granted by the vestry of St. George’s to alter the Church of the Ascension parish boundaries to take in 180 Simcoe Street, which was located directly south of St. George’s.)

For several years, with the congregation now worshipping at 180 Simcoe Street, the original church building was for sale. For a time it was used during the week as a place for Chinese immigrants, living in the neighbourhood, to gather and put on theatrical performances. Mr. Gibson, who would speak for ten or fifteen minutes before the performances, saw this as part of the parish’s outreach the immigrant community. (It is worth mentioning that the report of these activities in the Toronto Telegram in 1926 reveals the not-so-subtle racism of the time in its concern that a church property would be used in such a way.)  The church building itself remained for sale for several years; it seems that Mr. Gibson was never satisfied with any offers made to purchase it. In 1929, the building was rented to the Toronto Brake Service and converted into a shop for vehicle repairs.

In 1933, the bishop of Toronto, Derwyn Owen, sought the concurrence of the rector and church wardens of the Church of the Ascension to sell the property, in order to make way for the widening of University Avenue. After these consultations proved futile, he directed the disestablishment of the parish on December 21, 1933, and the property was sold.

The congregation worshipping at 180 Simcoe Street continued, eventually taking on the name the Church of the Good Samaritan and operating independently from the diocese. Its focus continued to be on providing housing for low income and marginalized people. Eventually the property at 180 Simcoe Street was sold, and the work moved to a property near Trinity-Bellwoods park where St. Hilda’s College had been located. The building is, today, John Gibson House (named after the former rector of the Church of the Ascension), and part of LOFT Community Services (formerly Anglican Houses). This link provides information about the history of Gibson House, linking back to its originals at the Church of the Ascension.

The property at 180 Simcoe Street is, today, Mackenzie Investments. 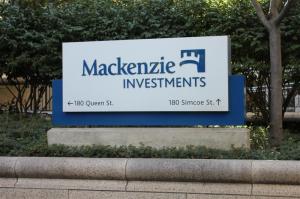 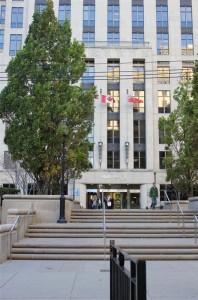 Leadership for this new congregation came from a man named the Reverend Henry Roche, a product of the Church of the Ascension’s Bible class, and formerly rector of St. Crispin’s Church. Roche was, it seems, a determined and unusual figure. In the building of the new Church of the Ascension. Mr. Roche himself constructed a Norman Tower in order to house the bell from the old Church of the Ascension. It wasn’t that he caused the tower to be constructed; he built it himself, with the help of boys in the (mainly Jewish) neighbourhood, who took turns passing rocks up to him.

“Mr. Roche’s nephew told of visiting his uncle at the Church and was asked if he could spare a little while. He was invited into the cab of a flat bed truck, one of which was parked on the empty corner lot of Eglinton. The construction crews, working on the store buildings, had left them when the work day was over. Mr. Roche found the keys in the ignition, invited his nephew into the cab and drove to the site of the old church which was being demolished. The two struggled to remove the three stained glass panels depicting the Ascension of the Lord from the remains of the building and transported them to the new site where they were installed above the Altar.”

The sign at the new Church of the Ascension read: “The Church of England in Canada”. The diocese of Toronto pursued legal action and, as a result, the congregation was forced to display the name of the parish only, with no reference to it being Anglican or Church of England.

Henry Roche’s untimely death led to the congregation’s rapprochement with the diocese, for (as an independent body) they found themselves unable to recruit a successor. The parish was re-established by Archbishop Owen’s successor, Bishop Ray Beverley, and given a new name — St. Margaret’s. A parish mission that had been meeting at North Prepatory School in Forest Hill, known as St. Andrew’s, was merged with the congregation and, in 1944, a new rector was appointed. The trauma of the long saga of the Church of the Ascension was sufficiently strong that the name “the Church of the Ascension” was not given to a new church in the diocese of Toronto until the establishment of the Church of the Ascension in Don Mills in 1956.

St. Margaret’s (which will be the subject of its own, separate post in due course) continued as a parish church until it was closed in 2009 and amalgamated with St. Clement’s, Eglinton (a parish which had opposed its re-establishment in 1944 because it was situated nearby.) The photo of St. Margaret’s below shows the stone Norman Tower that was Henry Roche’s handiwork. 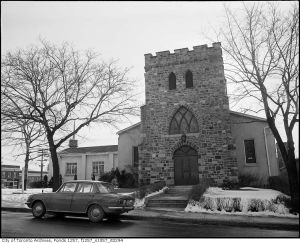 And those windows that Henry Roche removed from the first Church of the Ascension? They were eventually installed in the new building, along with new side panels. When St. Margaret’s amalgamated with St. Clement’s in 2009, these windows were removed and are now installed in their third home — in the main lobby of the newly-renovated St. Clement’s. 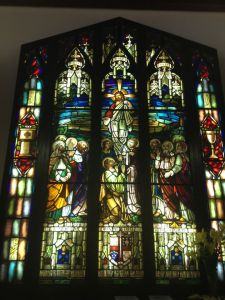 The inscription along the bottom of the original three panels reads: “This window was erected in 1943, as a thank offering to the glory of God for the re-establishment of the Church of the Ascension by the Rector, Rev. Henry Roche, MA”. After a oak reredos was added behind the altar at St. Margaret’s, this inscription was concealed for many years!

Thanks go to the Reverend Joanne Davies for alerting me to the presence of this window at St. Clement’s, and sending me photographs and historical information. And thanks to Peter Iveson, whose article in the Liberty Gleaner of September/October 2004 (a copy of which is in the diocesan archives) tells the story of the “rogue” Church of the Ascenion.