St Monica’s Anglican Church is one of the unique parishes in the diocese of Toronto, occupying a storefront location on the north side of Gerrard Street East, three blocks east of Greenwood Avenue, in Toronto’s East End. Since 2002, St. Monica’s has operated a ministry to the neighbourhood which includes both a worshipping community and outreach. “More a food bank than liturgical space”, as the parish website puts it. 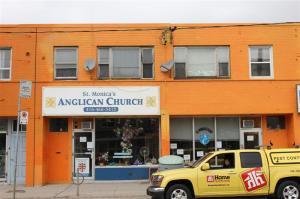 St. Monica’s roots can be traced to a location just three blocks east, on the north-east corner of Gerrard Street and Ashdale Avenue. This was the site that was purchased in 1907 for a new parish, which began in the early 1900s as a mission from St. John’s, Norway on Woodbine Avenue. The first building on the site was a small wooden church. The building below was completed in 1910. In its early years, the congregation of St. Monica’s was composed of “mostly English artisans”.

St. Monica’s became an independent parish in 1912 and, in 1921, sold the site at Gerrard and Ashdale to the Toronto Library Board, which then resold part of the property to the Eastwood theatre. Today the site is the location of the Gerrard-Ashdale branch of the Toronto Public Library. The theatre building is in the process of being demolished.

A new location was acquired on Hiawatha Avenue, a short distance south of Gerrard. The cornerstone of the second St. Monica’s was laid on February 7, 1923 and the last services in the first church held on May 13th.

This building, which was extended in 1922, served as the worship space for St. Monica’s until 1930, after which it was used as a parish hall.

The cornerstone for the third St. Monica’s was laid in 1930. (This is what is looks like today; I can’t explain the duct tape.) 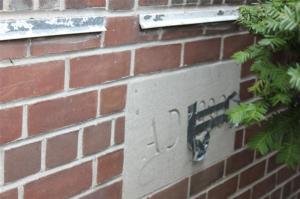 For twenty-seven years, only the basement and the full western facade were built.

This photograph in the diocese of Toronto archives is not dated, but I think it is of the interior of this basement church, judging from the photograph above of the east end of the exterior.

In 1954, the congregation took the decision to complete the basement church. The rector at the time, Frank H. Mason, put the need in a direct and uncompromising way: “In the suburbs there are many half-finished houses, but not in this parish. All houses except the house of God were completed long ago. An uncompleted church is a challenge and a reproach. We cannot do less for God’s house than we would do for our own.” The architects Mathers & Haldenby were chosen and the building completed in November 1957.

In 1967, the second St. Monica’s, which had been used as the parish hall since the 1930s, was demolished and a rectory built.

According to the St. Monica’s website, in 2002 the parish received an unsolicited offer by a Unitarian congregation and the Kew Park Montessori to purchase the site. The parish was, by then, operating a food bank from his Hiawatha Avenue location, and took the decision to relocate to a storefront ministry on Gerrard.

Today, the building continues in use by the Unitarian congregation and Montessori school. (I hope at some point to be able to see the inside and take photographs.) 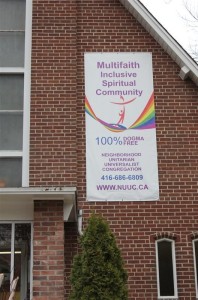 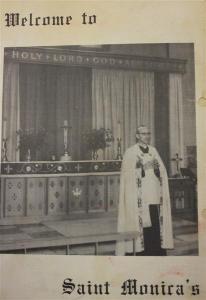 In the diocesan archives is a pamphlet that was distributed to households in the St. Monica’s parish in the 1962. It is an interesting insight into the vestiges of the parish ‘system’, where Anglicans living in a particular geographical area were considered to have a claim, and vice versa, on their parish church. (Knowing a little about Fr. Hutt, I suspect it is also an insight into the strength of his personality.) It reads:

This letter comes to you as a result of a Survey taken of this community recently. I am writing to you because of two things. (1) Although an Anglican, you attend no Church; or (2) You attend St. Monica’s Church, in which case we are sorry to say we have no record of you on our Parish Roll. Since this may be our fault,  we are writing to you for a further indication of your intention.

You live within the bounds of this Parish. You say that you are an Anglican. You have, therefore, made a claim on this Parish Church, and we feel we have a claim on you. We are interested in you, because God is interested in you. God loves all people and wants to bring them into His Kingdom. He has appointed His Church for just that purpose. St. Monica’s Church, therefore, welcomes you. We urge you to make this Church the centre of your worshipping.

We remind you that only you can give God your prayers, your worship, your adoration. No one else can. We remind you also that the worship of God is a duty. We owe God a debt of worship, and it is only honest to pay our debts, especially to God. The way to pay this debt it within the corporate Body of His Church on Sunday.

I am most interested in hearing from you and look forward to your reply. If, however, within a month from the date of this letter, I have not heard from you…I must regretfully assume that you do not wish to be considered a member of St. Monica’s Church.