Church of the Nativity, Monarch Park
Leave a comment

In 1911, 40,000 people lived east of the Don River; by 1923 the number was 160,000. The completion of the Prince Edward Viaduct in 1918 opened up the east end of the city, and presented new opportunities to serve the Anglican population moving into newly-created neighbourhoods.

The Reverend N.A.F. Bourne, the rector of Penetanguishine, was appointed to undertake the task of founding a new parish.  The need for a new parish, located between St. David’s (on Donlands Avenue) and the Church of the Resurrection (on Woodbine Avenue) was not in dispute; the location was. In his recollection of the time, Mr. Bourne recalls: “In November 1922, at the request of Bishop Sweeny I came out here and went up and down, and back and forth; and noted the progress and the possibilities. I reported to him this — “the people are there; the church ought to be there.” He knew this because he had gone door to door, finding (at first) just two Anglican families. The first meeting of what would become the Church of the Nativity included twenty-seven children and their parents.

Mr. Bourne and the bishop had different ideas of where the new parish should be located. It seems that the bishop wanted it to be south of Danforth Avenue, whereas the site that Bourne chose was north. “In order to satisfy the Bishop that no other site was available, I brought the Bishop out one evening…When we reached Greenwood Avenue, I asked the Bishop to look to his right (i.e. south) and see whether he could see any vacant lot. When we reached Rhodes Avenue the Bishop said: “this is where I thought the building should be.” The map in his office showed a vacant lot there. But maps get out of date rapidly in growing districts. Then, we continued onto Woodbine Avenue. Finally he was driven to Monarch Park Avenue, and saw for himself that there was no other lot available. It was by God’s guidance that the church had reserved this site. There was nothing else for the Bishop to do, but to sanction this lot.”

For five months, the new community worshipped in a tent “at a folding table from folding benches on a plank floor, and under a canvas roof” (according to a 1944 newspaper article) The first building erected was a parish hall, on the north-east corner of Monarch Park Avenue and Glebeholme Avenue. Within six weeks the new brick structure was completed, and the first service was held on October 7, 1923 for more than one hundred parishioners. The oak furnishings had already served St. Margaret’s and St. Martin-in-the-Fields. The organ came from St. Barnabas, Danforth (which had just purchased a pipe organ).

By 1927, the parish had grown to four hundred families, with an average of 314 pupils in the Sunday School. While the parish grew, however, the building did not, and it proved to be far too small to meet the needs of the community. In 1944, for example, the sanctuary was curtained off during the week because the nave was filled with activities, principally meetings of Cubs and Boy Scouts. 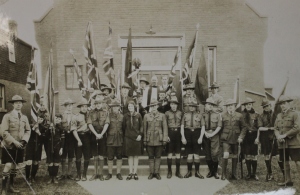 The photographs below show the crowded conditions in the basement for the Sunday School.

In 1956, sod was turned for an addition on the east end which includes a chancel, kitchen and choir rooms. This addition was dedicated on January 27, 1957. 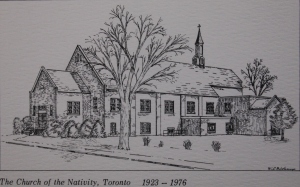 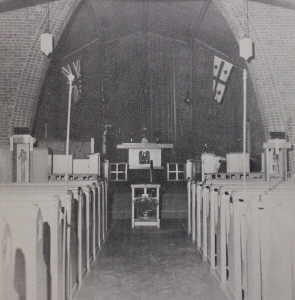 A  decade or so later, the changing parish demographics meant the future of the parish was in question. Its rector, the Reverend Owen Barrow, wrote about its situation in The Anglican (December 1969):  “Today the Church of the Nativity is debt free but has yet to be consecrated. Today it serves a rapidly decreasing English-speaking constituency and faces an uncertain future. “Amalgamation” is a word that grieves sentiment…The threat is here and real. The Anglo-Saxon population is moving out; the Italian is moving in. We are not replacing one parishioner — though we are left with scores who never came and don’t intend to come. The devoted men and women who for years found significance and purpose in providing for the housekeeping expenses and for meeting the demands of “those people down at the Synod office” are with us — though twenty, thirty years older than they were and a sadly depleted company. The envisioned future holds no specific promise of so-called improvement.”

Efforts were made to reverse the trend. An example was a family service held on the second Sunday of the month. The liturgy lasted less than forty minutes and was limited to three or four prayers, four hymns, and an illustrated talk. A free men’s buffet supper was offered, and joint events were held with St. Luke’s, Westwood and the Church of the Comforter. As well, a committee of churchwardens from these three parishes was struck to consider the future.

In the end, the parish vestry decided in June 1976 to disestablish the parish.

The name and memorials were moved to the new Church of the Nativity in Malvern, and the building was sold to the Holy Trinity Macedo-Bulgarian Eastern Orthodox Church. The photographs below show the site today. Holy Trinity’s website shows some photographs of the interior as it looks today. 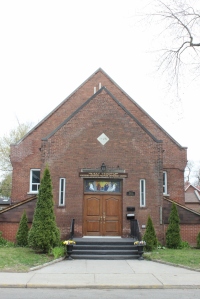